WEEK ONE Diagnostic Testing and US I Review
This week we will do some housekeeping, get to know each other, and review some important material from last year.
TEN things you need to do the FIRST WEEK of class:
1. Get a 1 1/2 inch, 3 ring binder. THIS IS REQUIRED. You will have difficulty passing this class without it.
2.  Print the "Student letter (above), Have a Guardian sign it, Make it page 1 of your Binder (remember your binder?)
3. Sign into my Google classroom (Code given in class).
4.Sign into AP Classroom. Instructions given in class.
5. Sign into TURNITIN with our class information (you already have an account from Summer).
6.Read The American Vision (TAV) chapter 13 tab at left - under Textbooks.
7. Answer the reading checks that you find as you read the chapters.
​8, In the section assessment, complete #1- DEFINE and #2- Identify.
9..Sign into our Online Textbook  Directions given in class.
10. Make a list of Presidents 1 through 45. Next to each President put the year they came into office and their political party. Make this page 2 of your binder.
10 a. Find your US History notebook from last year- you will still need it.

LESSON ONE: What are Historical Thinking Skills and reasoning processes?
​

When you write an essay in APUSH, your thesis should reflect one the following...
Historical Reasoning Skills
EVERY THESIS SHOULD ARGUE ONE OF THE FOLLOWING. 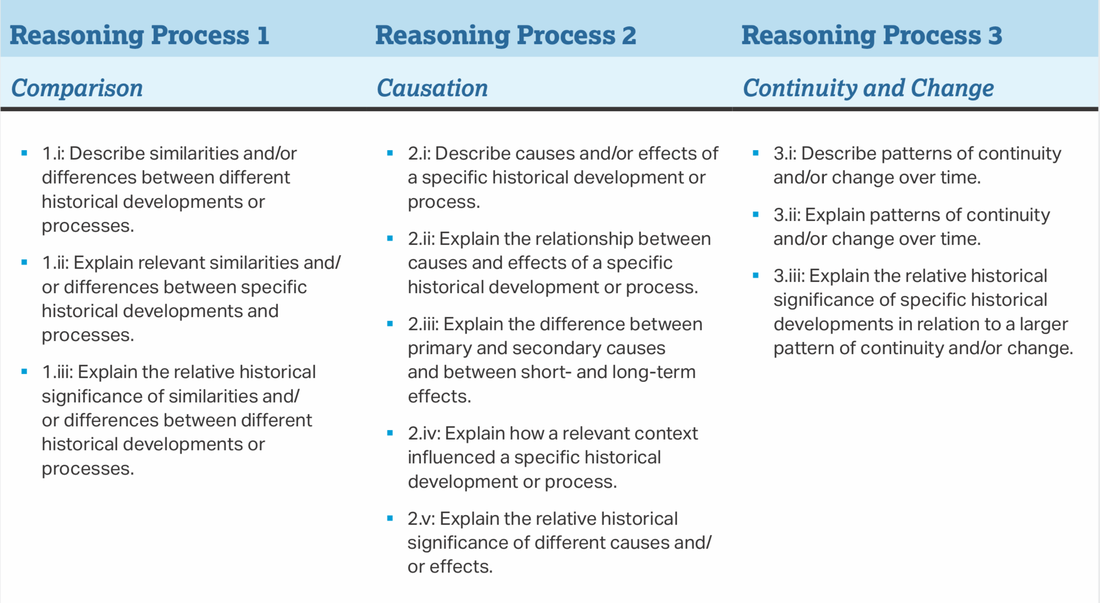 WEEK Three: US One Review
Readings:
TAV Chapter 13 (Complete the Chapter Assessment Key Terms and Key Facts)
Brinkley Chapter 16 (answer the practice Q's)
Selected Readings from class
As America expanded, many Americans desired to move westward and cultivate new lands. Federal government policies intended to facilitate the move westward, but it was often at the expense of the Native Americans who already occupied the land. As Americans continued to move the frontier farther and farther west, America expanded across the continent.
Americans encouraged relatively free and open immigration during the 18th and early 19th centuries, and rarely questioned that policy until the late 1800s. After certain states passed immigration laws following the Civil War, the Supreme Court in 1875 declared regulation of immigration a federal responsibility. Thus, as the number of immigrants rose in the 1880s and economic conditions in some areas worsened, Congress began to pass immigration legislation.
The Chinese Exclusion Act of 1882 and Alien Contract Labor laws of 1885 and 1887 prohibited certain laborers from immigrating to the United States. The general Immigration Act of 1882 levied a head tax of fifty cents on each immigrant and blocked (or excluded) the entry of idiots, lunatics, convicts, and persons likely to become a public charge.
These national immigration laws created the need for new federal enforcement authorities. In the 1880s, state boards or commissions enforced immigration law with direction from U.S. Treasury Department officials. At the Federal level, U.S. Customs Collectors at each port of entry collected the head tax from immigrants while "Chinese Inspectors" enforced the Chinese Exclusion Act.

Homework: Review the American History PPT (or Video) on Chapter 16.
THEN, complete the chapter 16 video guide.
KEEP the guide in your BINDER.

Download File
Essay Assignment: Trace the development of national politics in America during the “Gilded Age” and explain the dynamics operative during this age that persuaded middle-class reformers to turn their attention to creating social change. Who were the reformers and what were their purposes? Discuss the various reformist philosophies for confronting the problems associated with growing inequalities of wealth in the society.
Terms:
Pendleton Act of 1883, temperance movement, , settlement house movement, l, NAWSA, People’s Party.
​Please submit through TURNITIN.COM (90% of your grade) and hard copy in class (10% of your grade).
​
The Rise of American Imperialism (1890-1913
)A PERIOD OF FOREIGN POLICY INACTION
A SIGN OF THINGS TO COME: HAWAII
THE 1890s: REASONS FOR AMERICAN IMPERIALISM
THE SPANISH-AMERICAN WAR
THE ROLE OF AMERICA: PROTECTOR OR OPPRESSOR?
THE DEBATE OVER THE PHILIPPINES
CONNECTING THE PACIFIC AND THE ATLANTIC: THE PANAMA CANAL
THE ROOSEVELT COROLLARY
CHAPTER REVIEW

In the Progressive Era of the early 20th century, Progressives responded to political corruption, economic instability, and social concerns by calling for greater government action and other political and social measures.

LINK: How the other half lives (selected passages)

Download File
As Americans viewed the poverty throughout their cities, middle class Americans strove to enact reform measures that would aid their society. Groups were formed to aid the less fortunate Americans who inhabited the slums of the cities. Although these citizens strove to aid their fellow man, in many cases, there was a prevalent feeling of condecension towards the poorer classes.

What do you expect me to do with these documents?

WORLD WAR ONE -or- The great war

Download File
When war burst upon Europe in August 1914, most Americans wanted no part. Wilson immediately proclaimed American neutrality and called on the nation to be neutral "in thought and in action." Yet the United States and Britain were linked by extensive economic ties and many Americans felt close emotionally with the British. Fearing a world dominated by imperial Germany, and seething over violation of neutral rights on the seas, Wilson declared war in 1917.
Readings:
Brinkley Chapter 21
TAV Chapter 19
Selected
Woodrow Wilson, Message to Congress, August 19, 1914
Theodore Roosevelt, “The Hun within Our Gates,” 1917
Wilson's Fourteen Points
https://www.gilderlehrman.org/history-by-era/world-war-i/resources/guided-readings-world-war-i
​World War I and its aftermath intensified debates about the nation’s role in the world and how best to achieve national security and pursue American interests. (WOR-4) (WOR-7) (ID-3) (POL-6) ​
Multiple Choice on World War One

The war affected the lives of millions of industrial workers, farmers, women, and blacks in important ways. For all its horrors, World War I brought prosperity to the American economy. The wartime mood also gave a boost to moral-reform movements. Still, the wartime spirit saw new racial violence and fresh antiradical hysteria. The antiradical panic crested in the Red Scare of 1919-1920. Americans, tired of idealism, revealed their feelings in the election of 1920 leaving Republican Warren Harding in the office.

American culture and society in the 1920s were marked by a wave of new lifestyles and ideas. While the movie industry produced new celebrities and jazz music became popular, literature flourished and flappers defined a social trend. Amidst the speakeasies, jazz, and jitterbugs, Americans began to stray from traditional values as the culture changed.

America in the 1920s: The Beginning of Modern America

America of the 1920s was a period of prosperity as well as industrial and technological growth. With the recent end of World War I, Americans yearned for a return to "normalcy" and political leaders that could provide it, thus turning to the leadership of Warren G. Harding.
​
A DECADE OF PROSPERITY
REPUBLICAN LEADERSHIP IN THE 1920s
THE PRESIDENCY OF WARREN G. HARDING
THE SCANDALS OF THE HARDING ADMINISTRATION
THE PRESIDENCY OF CALVIN COOLIDGE
THE ELECTION OF 1928
URBAN VS. RURAL: THE GREAT DIVIDE OF THE 1920s
CULTURE IN THE 1920s
THE JAZZ AGE
THE LOST GENERATION
CHAPTER REVIEW
​

5 Themes You Should Know for the APUSH Test