Reminder: This course requires that you keep a one and one-half inch BINDER (not a spiral or marble notebook).  ​

1849 lithograph of tent revival during the Second Great Awakening. Tent revivals were hallmarks of this historical movement. (Source)


The Second Great Awakening was unlike the first, in that many people were converted into different sects of Christianity through camp meetings and tent revivals. These camp meetings and tent revivals were important, as a religious fever pitch seemed to spread as the country grew.
These more informal events would happen in places that were less developed than the East, and were equal parts entertaining and overwhelming. Fitting in with their informal settings, preachers developed a style of delivering religious sermons that made individuals feel as though they could feel the presence of God themselves, not through religious traditions and texts.
This was a huge transformation in how religion was viewed in the United States, and was the beginning of what was called Evangelism. Evangelists were less interested in keeping up traditions and religious hierarchies than other denominations of Christianity. Instead, their services had a more populist feel that elevated the experiences of the common man.
What was the effect of the Second Great Awakening?Methodists and Baptists were a product of the new, more Evangelical trend of the Second Great Awakening. When compared with the Puritanical and Calvinist denominations that came before them, Methodists and Baptists believe that humans could exercise some amount of free will and choose to be “saved.”
Intended or not, one of the consequences of this line of thinking was that there seemed to be a new role for women and African Americans (enslaved or not) in these new Christian denominations. There was an emphasis on the role that an individual could play to change his or her situation. Although this change was bound up in the social mores of the time, men and women, enslaved and free, could find a place in these more evangelical denominations.

A. Jackson is the first President elected via popular vote

2. John Quincy Adams cut a deal by putting one of his rivals on the cabinet and got his electoral votes. He was never a poupular President.

3. In 1828 Jackson changed the ame of the Democrat-Republicans to the Democratic Party. He won the elcetion easily with help from Martin Van Buren.

B. Jackson is regarded as a "rebel"

2. He allows the common man into the White House.
READING CHECK- How did the US become more democratic in the early 1800's?

1. The Kitchen Cabinet - puts in his "cronies"

2. The Spoils System - replaces 10% of Federal workers with loyal Democrats.

3. Jacksonian Vetoes - more vetoes then all other Presidents combined.

4. Ignores the Supreme Court -TRAIL OF TEARS - In Cherokee Nation v Georgia he removed the Indians against a Supreme Court order. He is rumored to have said: The Supreme Court has made its decison, now let THEM enforce it:"
READING CHECK: What was the Trail of Tears?

5. Passed the Force Bill -NULLIFICATION CRISIS authorized the use of military force to make sure South Carolina paid the protectibe tariff they had called "The Tariff of Abominations."
READING CHECK- What caused the Nullification crisis?


6. Destroyed the 2nd National Bank of the a United States - Congress had voted to save it but he then used his executive power to withdraw all fderal funds. He felt it was the "agent of the rich."
READING CHECK: Why was Jackson against the Bank of the US?


Tippecanoe (Harrison) and Tyler Too!
Describe Two Theories of Harrison's demise.
Was
​READING CHECK- What NEW political Party won the election of 1840?
Reformers of the Mid 1800'sReformers of the Mid 1800'sMajor reform movements existed in the following areas:
A. Women's Rights
B. Temperance
C. Education
D. Treatment of the insane
READING CHECK- What Three areas of social reform did reformers target?
READING CHECK-What Events of the mid-1800's sparked the first women's movement? 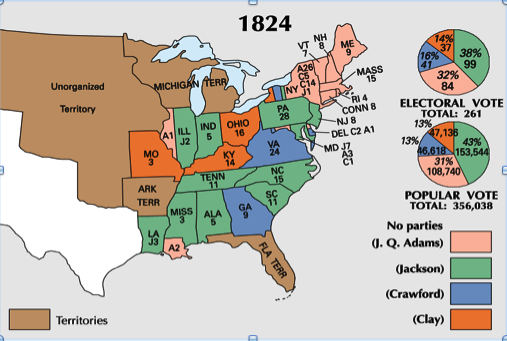 February
Chapter 9- Manifest destiny and the war with mexico

Download File
Homework:
Chapter 9 Reading Checks
​
I. Manifest Destiny
A. How did America expand its borders in the 1800's?

1. Louisiana - Purchased in 1803 by President Thomas Jefferson for 15 million dollars.2. Florida - Ceded (given) to the United States as a part of the Adams - Onis Treaty in 1819. A US army led by Andrew Jackson had been perched on the border of Florida. Realizing they would be unable to keep the territory (nor did they want it because of the harsh climate) the Spaniards gave it up.
3. Texas - American settlers had come to Texas and built planations and farms. The settlers, led by Stephan Austin, asked Mexico for admission into the Mexican nation as an independent state. The Mexicans refused and war broke out highlighted by Santa Anna's attack on the Alamo. Texas declared herself independent in 1836 and its first President was Sam Houston. In 1845 Texas was annexed by the United States and became the 28th state.
4. Oregon - Questions over the Oregon territories had long existed. Russia, France, Britin and the United States all had claims in the area. Russia and France gave upo their claims and then England negotiated a treaty with the United States to draw the boundry at 49 north latitude, where it remains today.
5. Mexican Cession - Tensions between America nad her southern neigbor had been high for some time and had only increased as a result of America's annexation of Texas. President Polk, with his eye on luring Texas into war, sent US troops over the border across the Rio Grande river, a disputed border. When Mexico attacked the US Polk responded by claiming that the Mexicans had perpetrated an unprovoked attack. Congress declared war and the US demolished the weaker Mexican army. As a result of the treaty that ended the war the US gained the Mexcian Cession and paid Mexico 15 million dollars for their loss.
6. Gadsden Purchase - The US realizing the importance of this territory for railroad building paid Mexico 10 million dollars. Considering the price paid for Louisiana and the Cession lands this was a large amount. We paid this much due to a feeling of guilt over our participation in the Mexican American War.

B. How did the US justify this territorial expansion?

1. Simply put, Manifest Destiny. The term Manifest Desitny was first coined by Congressman Robert Winthrop and then made popular by newspaper publisher John O'Sullivan in the 1840's. It meant that it was Gods will that Americans expand from sea to sea.Americans claimed they were bringing God, technology and civilization to the the west. Of course they also brought death, disease and war but that was never publicized.
I found this song on the web which may give you one perspective on Manifest Destiny:

​
​C. What problems were caused by westward expansion?

1. As you should know by now the main issue was the extension of slavery into the territories. The South was for it and the North against it. Various controversies surfaced but the passage of the Missouri Compromise was thought to have solved them. The nation was wrong. 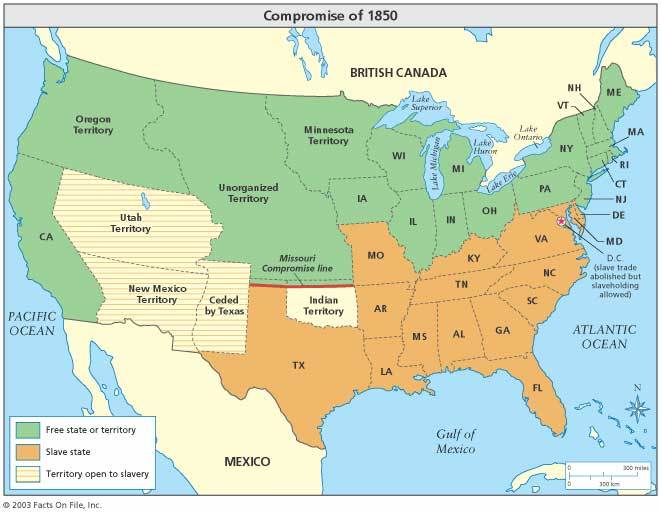 The February SGO is about the Dred Scott decision.