​Sociology is the study of groups and group interactions, societies and social interactions, from small and personal groups to very large groups. A group of people who live in a defined geographic area, who interact with one another, and who share a common culture is what sociologists call a society. Sociologists study all aspects and levels of society. Sociologists working from the micro-level study small groups and individual interactions, while those using macro-level analysis look at trends among and between large groups and societies. For example, a micro-level study might look at the accepted rules of conversation in various groups such as among teenagers or business professionals. In contrast, a macro-level analysis might research the ways that language use has changed over time or in social media outlets.
The term culture refers to the group’s shared practices, values, and beliefs. Culture encompasses a group’s way of life, from routine, everyday interactions to the most important parts of group members' lives. It includes everything produced by a society, including all of the social rules. Sociologists often study culture using the sociological imagination, which pioneer sociologist C. Wright Mills described as an awareness of the relationship between a person’s behavior and experience and the wider culture that shaped the person’s choices and perceptions. It’s a way of seeing our own and other people’s behavior in relationship to history and social structure (1959).
One illustration of this is a person’s decision to marry. In the United States, this choice is heavily influenced by individual feelings; however, the social acceptability of marriage relative to the person’s circumstances also plays a part. Remember, though, that culture is a product of the people in a society; sociologists take care not to treat the concept of “culture” as though it were alive in its own right. Reification is an error of treating an abstract concept as though it has a real, material existence (Sahn 2013).
Topic 1: Elements of Culture
Topic 2: Cultural Views
Topic 3: Theories of Socialization
Topic 4: Factors of Socialization
​Topic 5: Social Structure 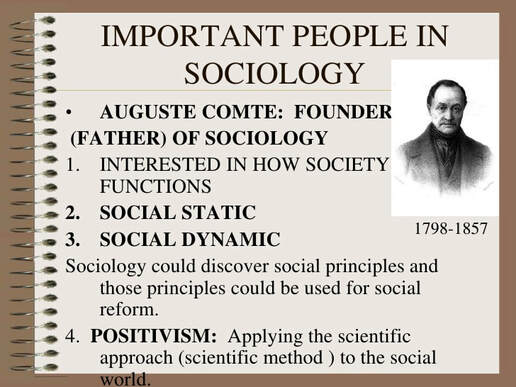 For this course, We will look at problems through the lens of functionalist,  conflict theorist and interactionist perspectives

You should know these definitions and be able to use them throughout the course.
The Functionalist perspective is based largely on the works of Herbert Spencer, Emile Durkheim, and Robert Merton. According to functionalism, society is a system of interconnected parts that work together in harmony to maintain a state of balance and social equilibrium for the whole.

Conflict theory, first purported by Karl Marx, is a theory that society is in a state of perpetual conflict because of competition for limited resources. Conflict theory holds that social order is maintained by domination and power (rather than consensus and conformity). According to conflict theory, those with wealth and power try to hold on to it by any means possible, chiefly by suppressing the poor and powerless. A basic premise of conflict theory is that individuals and groups within society will work to maximize their own benefits.

Symbolic interactionism is a theory that focuses on the relationships among individuals within a society. Communication—the exchange of meaning through language and symbols—is believed to be the way in which people make sense of their social worlds. This perspective sees people as being active in shaping the social world rather than simply being acted upon.